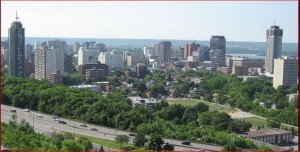 Hamilton is the No. 2 performer when it comes to employment in Canada, according to the Bank of Montreal’s latest regional labour market report.

But the third-quarter report — called “Hammer Time” — includes a caveat explaining the city’s sunny showing is based on residents with jobs, including those who commute to the GTA for work.

“As we often caution, this partly reflects commuting out of Hamilton to jobs located elsewhere in the GTA (the survey is based on your place of residence),” the regional “report card” says.

Because of the same dynamic, Kitchener, Barrie, Guelph and Oshawa also rank in the top 10, it notes. Kelowna, B.C., took the top spot in the BMO study.

It calls Hamilton this quarter’s “real eye-catcher” with employment jumping 12.5 per cent year over year and a 4.2 per cent unemployment rate.

The senior economist said while the jobless rate is falling, population flows to Hamilton from the GTA have accelerated since 2015 due to “affordability reasons.”

Local market observers have said that phenomenon has been a major driver of Hamilton’s hot real estate run.

Last week, the Realtors Association of Hamilton-Burlington reported the average sale price in September for residential properties in the region was $555,698, a 7.2 per cent increase over September 2016. Meanwhile, the average price of a home in Toronto last month was $775, 546, according to the Toronto Real Estate Board.

Red-hot real estate, however, has been a double-edged sword for Hamilton, with some residents struggling to find affordable housing in an era of precarious employment.