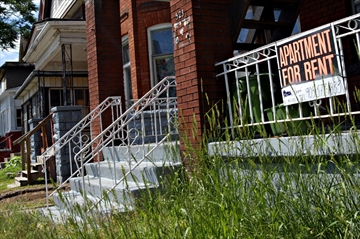 A dip in vacancies and a spike in rents threaten to make the city’s social housing wait list longer and put more people on the street, city staff say.

“There will definitely be great hardship for people,” Kirstin Maxwell, policy and program specialist in the city’s housing services division, told councillors Monday.

Between 2013 and 2014, Hamilton’s vacancy rate fell to 2.3 per cent from 3.9 per cent, notes a city report based on Canada Mortgage and Housing Corporation data.

The situation is making it harder to find adequate affordable rental units and could drive up the cost of tax levy-supported social housing subsidies, city staff said.

Waterdown is bursting with new homes, but residents have few options when it comes to affordable rentals, Flamborough councillor Judi Partridge said.

“They’re getting priced right out of the market.”

To feed the demand, some landlords are offering tenants financial incentives to move out so they can renovate buildings and jack up rents.

“That’s one part, but there’s an even more insidious one where they’re just kicking people out,” said Ward 3 Coun. Matthew Green.

Green said landlords serve tenants unwarranted eviction notices and don’t register them, or say they’re going to move in but don’t and renovate instead.

One way to ease the rental crunch is “density bonusing,” a planning policy that allows developers to raise the density of their project if they provide some affordable housing units.

Another is “inclusionary zoning,” which requires a certain percentage of affordable-housing units in a given area. That tool requires a change in provincial legislation.

Coun. Terry Whitehead called the housing services report a wake-up call. “It is the start of a dialogue that I think needs to take place.”

Green said the city should establish a rental registry that includes information about landlords and properties to keep tabs on the unknown “secondary market.

“What I’m concerned about are the situations in housing that we can’t see.”