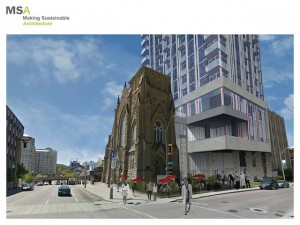 A slew of upcoming condo projects in the lower city promises to transform Hamilton’s skyline.

More than 20 multiple residential developments — some rising 20 storeys and more — are in the works throughout the core.

These townhouses, condos and apartment developments are all part of a wider trend across the entire city.

Glen Norton, the city’s manager of urban renewal, says the condo boom is common in downtowns across North America because of shifting demographics. More and more, people want to mesh creative arts with old industrial sites and live in urban, walkable communities.

And the future GO station on James North is propelling the trend — especially within the growing creative arts sector.

“We seem to be having the experience typical of many old cities. It’s a North American trend,” says Norton.

“The young people want to live in an area of activity, they want to walk to work and be part of that scene. Then there are empty-nesters who want the same things.”

Curtain rises on new look for the Tivoli

Jason Thorne, the city’s new senior manager of planning and economic development, confirms the city’s trend toward high density building — and key new projects unveiled for the core are evidence of that.

Drew Hauser is a local architect working on the Tivoli Theatre condos — the restoration of the former vaudeville theatre, which includes a 22-storey condo tower — and on The Connolly, a mixed-use condo project that calls for a 30-storey condo tower in the former James Street Baptist Church.

While they promise to be transformative, Hauser argues they aren’t out of the norm.

“Those heights are in the downtown already,” he says, pointing to the 43-storey Landmark on Main Street East and the Olympia, perched on the escarpment, that tops it.

The numbers don’t tell the entire story, though.

New projects are popping up weekly, such as one by the Vrancor Group which was just at the city to discuss plans for a 12-storey, mixed-use building at 220 Cannon St. And there are some downtown projects that haven’t even made it to the city’s building department yet. Among them, the Artizen project by the Highrise Group beside the Lister Block.

“There is a value to the real estate that will change the urban landscape very positively. It’s that balance for sustainable development, not just financial but social and environmental as well.”

Meanwhile, developers for The Connolly and The Tivoli have met with city officials and are beginning the process of getting site plan approvals.

Thorne says the trend to urban density has led to a need for the city to review its Downtown Secondary Plan so it can offer clear guidelines on where developers can be successful with plans for low-level, mid-level and high-level buildings.

“I think (the city skyline) is going to change,” he says. “Anytime you get tall buildings you redefine the skyline. That’s really important to the image of a city. What kind of skyline is it? How do they land on the street?”

Thorne knows there are challenges to drafting a new downtown planning policy that can accommodate the needs of the marketplace while respecting the heritage nature of various neighbourhoods. But he says it’s an “exciting” time for Hamilton.

“What makes Hamilton unique is that this is happening in a historic space in an established city. Burlington, Mississauga, Vaughan, they don’t have the 150 years of social fabric to work with,” says Thorne. “That means we have to approach this carefully.”

Designs of the former James Street Baptist Church were released this week.

Hauser says each project should be approved based on merit — not just on zoning.

“There is a value to the real estate that will change the urban landscape very positively,” he says. “It’s that balance for sustainable development, not just financial but social and environmental as well.”

For developer Jeff Paikin, height isn’t the only issue the city needs to address. Paikin, who has been working on several projects in the core — among them, City Square on Robinson Street — is frustrated by the city’s downtown improvement zone, which was enlarged in June to within about a block and a half of the property.

The bylaw sets out various exemptions to encourage residential development inexisting buildings, heritage sites, and industrial lots in a specific area of the lower city.

For Paikin, it results in about $20,000 extra in development and park fees per unit, he says. And this has halted plans to start on Phase 3 — about 160 units — of City Square.

“I have been talking to city council but until the election is over, I don’t expect this to be resolved soon,” he says. “I’ve got developer friends from Toronto who have come here but they look at the zone and they can’t do anything. It doesn’t make sense (financially). The end goal is to create residential (projects) in the downtown area and this does not do that. ”

But there are developers willing to take a risk.

For example, Ron Van Kleef bought a slice of property “nobody wanted” in 1997 in an old neighbourhood tucked next to the escarpment. Even though the entrepreneur had never embarked on a residential development project, he had a gut feeling that Hamilton’s time would come.

An artist’s rendition of the Charlton Condos at 467 Charlton St.

The one-time bowling alley at 467 Charlton had closed. He cleaned it up, rented it out and waited. Then four years ago, he started to pull together plans for a condo development, consulting with the city and forming staff to lead the project.

He heads to the city’s planning committee this month for rezoning permission and is confident of approval. “I’m a Hamilton guy. I bought this because I thought one day I could do something with it,” he says.

The 62-unit building is in the same neighbourhood as the Stinson School, which Harry Stinson recently converted.

Stinson is converting some grand old homes across the street and a few months ago bought the old Gibson School on Barton Street East.

“I looked at it three years ago and didn’t see the hope. Now I do,” says Stinson.

It reminds him of his candy factory loft project on Queen Street West in Toronto in 1993.

“The usual suspects in Toronto asked me ‘Why would you go to that godawful area?'” he says. “Two years later, there they were, lining up sales offices up and down the street. It was a dramatic transformation. There is the same change coming for Barton ”

Stinson is convinced there is a shortage in the supply of urban-style multi-residential buildings.

“Hamilton is a big city. Right now on the market there are less than 2,000 (multi-residential) units available,” he says.

And for the 20 or so projects lined up for the lower city, there are only about 1,600 units with the possibility of a few hundred more. That still only equates to about 3,000 to 4,000 people.

But it’s a start. It’s also an interesting mix of new buildings along with restorations of old and architecturally interesting buildings such as the Royal Connaught, being resurrected by Rudy Spallaci and Tony Valeri.

Then there’s Shawn Maher, who picked a Young Street lowrise apartment building that was so derelict the mail carrier wouldn’t deliver to the single remaining tenant.

“It was such a bad area,” he remembers.

He gutted the building, added a few flourishes and made more than a few bucks a couple of years ago when he sold it to a good landlord, a Toronto investor.

He then turned his attention next door, to a mouldy old variety store and nasty buildings. He bought them, tore them down. He was inspired by the brownstones circling Central Park in New York.

“Everyone told me ‘You won’t sell Manhattan apartments in downtown Hamilton,'” he says. “Then they said you won’t get $200,000 for those.”

Now he’s on to the Beasley neighbourhood where he’s building a similar concept of a six-unit townhouse.

“Five years from now you won’t be able to touch that neighbourhood,” says Maher of Beasley.

John Mokrycke, an architect involved in several downtown projects, including 366 Bay Street North and Acclamation Lofts on James North, says there is incredible momentum and interest among developers — and, more importantly, buyers.

He thinks the new James Street North GO station has a lot to do with it.

“Toronto is becoming very difficult to live in,” he says. “Hamilton is a stable, real city. It’s quiet, relaxed and there are good neighbourhoods. People are anxious to come to a place with these qualities